Later on his son "MITHI-JANAKA" (मिथि जनक) became the second emperror & after him, his kingdom was named as "MITHILĀ" (मिथिला). In fact MITHI-JANAKA has established a town / city named "MITHILĀPURI / MITHILĀ NAGARI" (मिथिलापुरी / मिथिला नगरी) as the capital of "VIDEHA KINGDOME". Later the term "MITHILĀ" has expanded & became synonymous of the entire "VIDEHA KINGDOME". And the capital town "MITHILĀPURI / MITHILĀ NAGARI" was replaced by the name "JANAKPURI / JANAKPUR" (जनकपुरी / जनकपुर) .

After The fall of Janaka dynesty , Mithila was fragmented in small  provinces ruled by locally elected kings. This was a type of democracy.  Although these “FRAGMENT PROVINCES” were ruled by different kings but due to cold war with Magadh (मगध) they formed a strong UNION / SANGHA (just like former USSR, USA, Union Republic Of India or Europian Union etc).  They were united over military , economic & cultural levels (सैन्य-सामरिक, आर्थिक व सांस्कृतिक स्तर).  This union was named as “VAJJI / BAJJI MAHASANGHA/ MAHAJANAPADA” (वज्जि/बज्जि महासंघ/महाजनपद). This was ever first phenomenon of “DEMOCRACY / REPUBLIC” (प्रजातण्त्र / जनतण्त्र / गणतण्त्र) all over the world.

In the era of king "HARSHAVARDHANA" (हर्षवर्धन) this region was termed as "TIRBHUKTI" (तिरभुक्ति / तीरभुक्ति) i.e. the province / state which lies between the river-banks, because mithila is surrounded by rivers by 3 sides (namely the gangase,gandaka & koshi with their tributaries).

Hence all the above FIVE NAMES are synonymous & represent the same geographical  landscape / area / region - not the the different areas / regions. Whoever says that they are different , is lying &  making us fool & certainly trying to break us. Please be alert !!!  ………………………….. And if all the above names are synonymous then how the languages MAITHILI, VAJJIKĀ, BAJJIKĀ & TIRHUTIYĀ may be different?  In fact these are the SYNONYMS OF SAME LANGUAGE “MITHILĀ – BHĀSHĀ” (मिथिला - भाषा).


Moreover “ANGA PRADESH / CHAMPA” (अंग प्रदेश / चम्पा) historically never remained the part of HISTORICAL MITHILA KINGDOME. In fact this small region was the COLONIAL PROVINCE (उपनिवेश)  of “KURU / KAURAVAS” (कुरु / कौरव)  that was allocated to “KARNA” (कर्ण)  by his friend “DURYODHANA” (दुर्योधन). It was influenced by MAGADHA time to time. During PAL DYNESTY (पाल राजवंश), it has the glorious history of having “VIKRAMSHILA UNIVERSITY” (विक्रमशिला विश्वविद्यालय). Even so, this region has the close cultural as well as linguistic connection with MITHILA. CHAUTHA-CHANDRA / CHAURCHAN (चौठ-चन्द्र / चौरचन) is a unique festival of Mithila is also celebrated in this region, Some people regard “ANGIKĀ” (अंगिका) as a SEPARATE LANGUAGE while some regard as a DIALECT OF HINDI. If this is a dialect then certainly NOT OF HINDI but OF MAITHILI as per unbiased linguistic grounds. Sir GEORGE ABRAHAM GRIERSON has named it as  CHHIKĀ-CHHIKI MAITHILI (छिका-छिकी मैथिली) & regarded as a DIALECT OF MAITHILI.

In fact merely such historical division of MITHILĀ & ANGA on the ground of transient political lines may not be a parameter for a separate / different language, otherwise the modern MAHĀRĀSTRA may have four different languages i.e. languages of Vidarbha, Marathwada, Khandesha, Paschima Maharastra etc.

So the language / mother tongue of the above mentioned regions of BIHAR (INDIA) & NEPAL is same i.e. MITHILĀ - BHĀSHĀ / MAITHILI (मिथिला – भाषा / मैथिली).

During British rulings (in 1875), they divided the entireTIRHUT / MITHILĀ into TWO DIVISIONS namely MUZAFFARPUR & DARBHANGA as per their DIVIDE & RULE POLICY. At that time DARBHANGA division was constituted by modern Darbhanga, Madhubani, Samastipur, Saharsa, Supaul, Madhepura, Purnea & all the other remaining districts of EASTERN MITHILĀ. And then MUZAFFARPUR division was constituted by Muzaffarpur, Vaishali, Sitamadhi / Sitamarhi, both Champarans i.e the WESTERN MITHILĀ.


At that time the BRITISH POLICY MAKERS had sawn the seeds of division that the language of DARBHANGA is MAITHILI & that of TIRHUT is TIRHUTIYĀ / BAJJIKĀ. Meanwhile a noble, unbiased linguist Sir GEORGE ABRAHAM GREARSON has recognised that MAITHILI is a separate, living language which has SEVERAL DILECTS including so called BAJJIKĀ & CHHIKA - CHHIKI MAITHILI (ANGIKĀ). Initially Sir G.A.Grearson was a little bit confused & had placed Maithili into the BIHARI language. But, soon he realised that it was a BLUNDER MISTAKE to place MAITHILI under BIHARI. He has confessed such facts during the survey of BANGLA, ORIYA & ASAMESE languages and mentioned that MAITHILI IS A SEPARATE LIVING LANGUAGE.

Later, even after independence a few peoples used to MISGUIDE the MAITHILS narrating the above mentioned DIVIDE & RULE POLICY . They even propagated this policy more saying that ANGA was a separate entity in history, hence their language can't be MAITHILI .

Formation of DARBHANGA, TIRHUT , BHAGALPUR etc. COMMISSIONARIES has also added fuel to this DIVIDE & RULE POLICY . Peoples have been wrongly taught that MAITHILI is the MOTHER TONGUE of only a few districts which fall under DARBHANGA COMMISSIONARY  & that of TIRHUT COMMISSIONARY is TIRHUTIYA / BAJJIKA & that of BHAGALPUR COMMISSIONARY is ANGIKA / ANGICA. Here the term TIRHUT is forcibly restricted for only a few districts rather than the WHOLE MITHILĀ. Similarly, then BHAGALPUR COMMISSIONARY consists of BEGUSARAI, KHAGARIA, BHAGALPUR, BANKA & JAMUI etc. districts & they are taught (by some unknown forces) that their MOTHER TONGUE is ANGIKA instead of MAITHILI because ANGA was a different entity at the time of MAHABHARATA.

I am going to ask them that if mother tongue of so called ANGA & MITHILĀ can't be same merely because they were separate entities in history then how the language of BHOJPUR & a few people from MAURITIUS may be same? If the dilects from Darbhanga , Champaran, Vaishali, Purnea , Araria, Khagaria, Begusarai, Bhagalpur & other regions differ somewhat, then so what ? - this is a characteristic of a living language . Even dilects from Chhapra, Siwan, Arrah , Sasaram & Ballia etc. differs considerably - then how they claim for the same language ?


So, I request to all MAITHILS (irrespective of age, sex, cast, religion, districts, regions) to understand the facts and reply the so called destructive forces peacefully by unity. Please don't be misguided by any such forces. Rest depends upon you - after all it is your freedom  to accept the fact or being misguided. 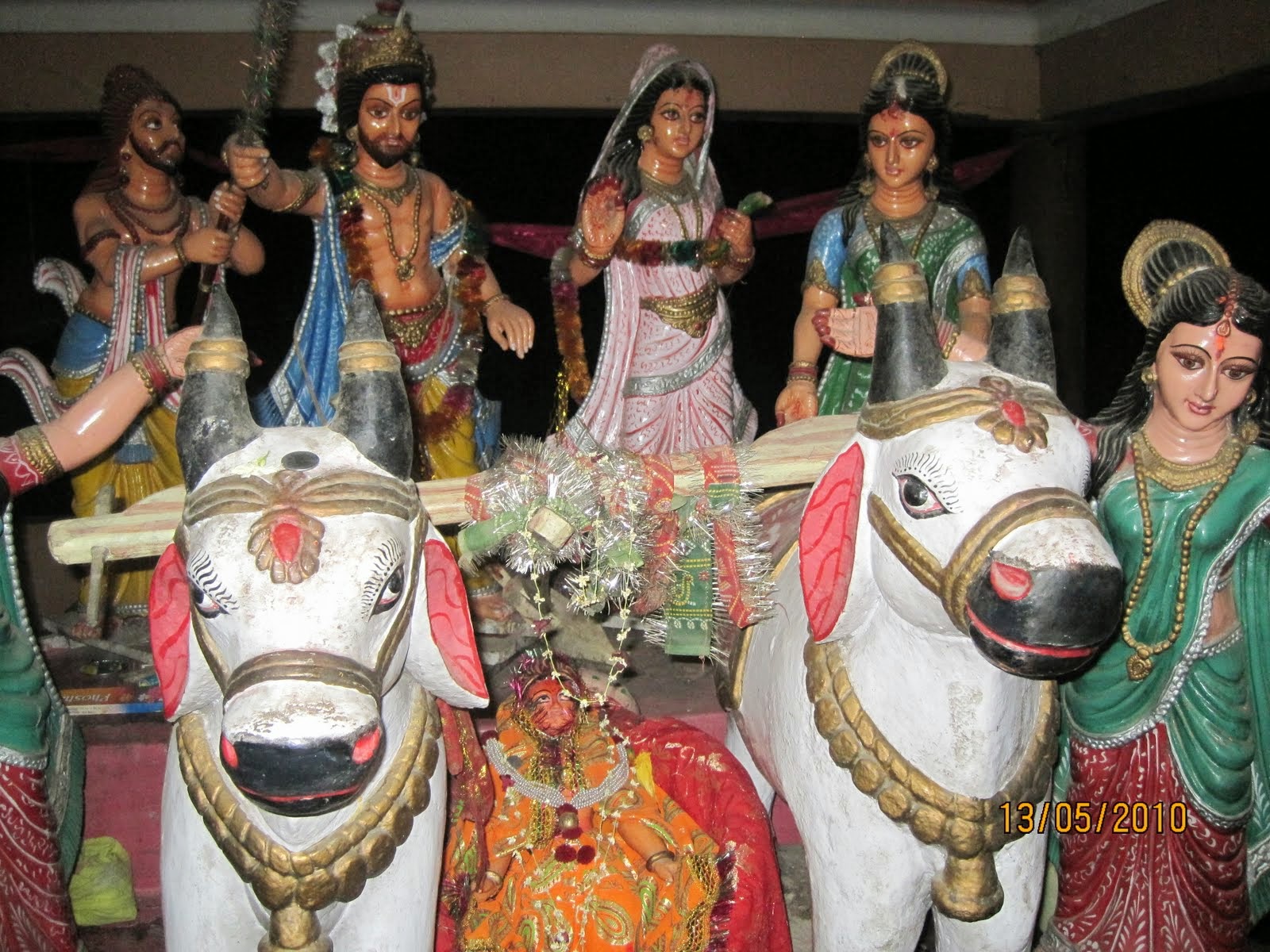 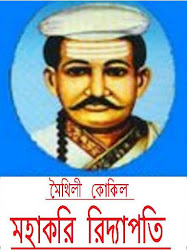 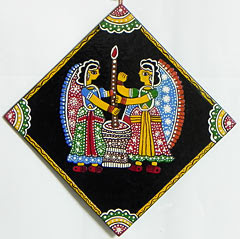 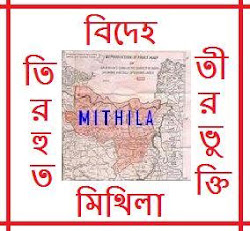 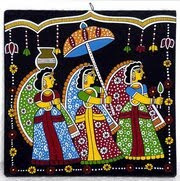 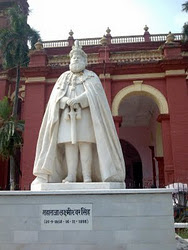 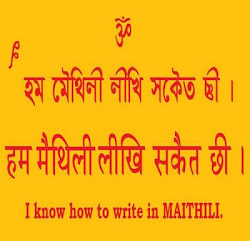